Almost all visitors rate their time in the National Park positively. 98% of respondents stated they would return. Visitors come for the landscape and engage in a variety of activities when here.

Most people came by car or van, with an average of three people travelling together. Visitors got involved in a wide range of activities including climbing, cycling and sightseeing, but the most popular activity was walking. Two thirds of visitors are regular visitors, only 7% are first time visitors. Most visited on a Saturday or Sunday, with over half only coming at the weekend.

Half of all respondents visited the area for the scenery and because they had been to the area before. One third of respondents stated they visited because they lived locally and/or the area was easy to get to. (See later discussion for limitations of visitor surveys).

The Peak District attracts a large amount of retired people and students. A very small proportion are unemployed and most people come from better off areas of the country. Ethnic groups are underrepresented in our visitor profile [2:1].

Whilst there is a variation in the gender split across specific survey locations, the overall gender split was 49% female and 51% male. About half of the visitors were in employment, 21% were retired and 15% were students. The proportion of visitors employed was 51%, nationally this is slightly higher with 56% of people employed. However, the proportion of retired people (12%) and students (5.8%) visiting the Peak District National Park is overrepresented than the national rate.

Although there has been an increase in younger people visiting the Peak District (9% of respondents), this remains under the national average. However, under 16s were not directly surveyed; this information is from respondents that were asked their age as well as the ages of all the group members.

The proportion of 65+ age group is 17% for the Peak District compared to 16% for England as a whole. However, this age group is significantly overrepresented in the White Peak compared with the Dark Peak.

In 2015, 4.6% of visitors stated they had a mobility problem (3% in 2005). In 2011, nearly 1 in 5 people (17.9%) in England and Wales reported a disability that limited their daily activities [3]. People with a mobility problem are therefore underrepresented in visitors to the Peak District.

Deprivation varied greatly amongst visitors. Some visitor postcodes were in the top 1% most deprived neighbourhoods and conversely there were postcodes from the least deprived areas in the country. On average, visitors were ranked at 60% most deprived (100% being least deprived). This means visitors are slightly above the national average in terms of deprivation and have better than average health, income, education and environment.

In 2015, 91% of visitors to the Peak District classed themselves as White British compared with 94% in 2005. Aggregating White British, Irish, and White Other, this figure is 95%, which is higher than the national level of 85.4% [4]. Of the respondents who were surveyed directly from National Park Authority Services, 8 in 10 (80%) [5] were classed as White British (80% England [4:1]). Other minor ethnic groups, for example, Black, Asian and mixed multiple ethnic groups, are all underrepresented.

Some areas of the Peak District attract a more representative proportion of ethnic groups. Dovestones attracted the largest proportion of Black Minority Ethnic Groups at 11%. Bakewell and Chatsworth had the largest number of Chinese visitors (5%).

The average group size is 3.4, which is the same as in 2005. The more remote locations (e.g. Snake Pass & Longdendale) attract smaller group sizes. The Snake Pass attracts the largest amount of individual visitors. Out of the 19% travelling alone (111 respondents), of these 26 were female (23%) and 85 were male (77%).

# How long do people stay? 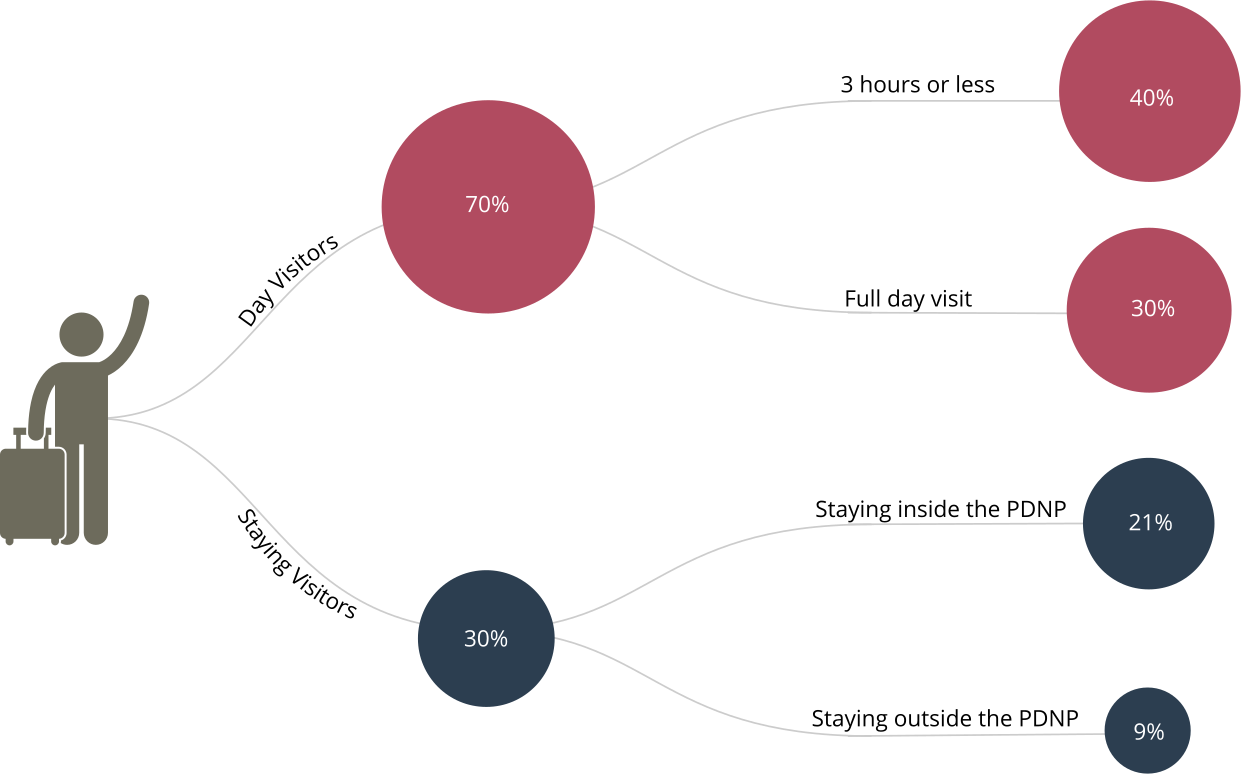 The average length of visit for those that stay overnight is 4.1 days. Visitors stayed longest in the White Peak (4.4 days) (comparison: Dark Peak 3.7 days, South West Peak 3.9 days). However, overall, the average length of stay is 3.3 hours compared with 3.6 hours in 2005. Visitors stayed 2.6 hours in the South West Peak, 3.8 hours in the White Peak and 3.4 hours in the Dark Peak. Overnight visitors make up 30% of all visitors. Of these, 70% (equating to 21% of all visitors) stayed inside the National Park.

# Where do visitors stay?

# Why do visitors come?

Nearly all visitors come to enjoy the protected landscape and special qualities of the National Park. Over half of all respondents visited the area for the scenery and/or because they lived locally. Only 17% said they visited because they had never been before [2:4]. There was little difference in motivations between visitors to the Dark Peak, White Peak and South West Peak.

# What did visitors do?

Over half of all visitors state their main activity as walking 2-10 miles. Although it is expected that walking is the main driver for visits to the area, this may not be a representative sample of recreation levels within the whole Peak District National Park and may be influenced by the location of the surveys and the method of interception [2:5].

A survey aimed at specific groups would be a better indicator of volume levels for recreational use such as cycling or climbing. However, it remains difficult to get a full assessment of true recreational levels across all activities within the Peak District.

# How do visitors get here?

A large proportion of visitors arrive by car and this is simply down to convenience.

83% of visitors came to the area by car [2:6], indicating no significant change from 2005 when 85% came by car. However, most of the survey sites were around car parks, which will bias the data. For instance, there will be destinations in the Peak District that attract greater numbers travelling by bus or bicycle, but these are more difficult to sample as part of a face-to face survey.

# How do visitors plan their visit?

Most visitors are repeat visitors that come from the regional area, or roughly, an hour’s drive away from the Park boundary, and use their knowledge of the National Park to plan their trip. Two thirds (66%) of respondents relied on previous knowledge of the area, which is similar to 2005 (68%). This is not surprising, as many visitors come from the surrounding area and are frequent visitors [2:7].

# What do visitors spend money on?

There remains a significant proportion of visitors who do not spend money when they visit. Staying visitors contribute more to the local economy than leisure day visitors do.

The average visitor spend is £29 for visitors who spent money, and £24 for all visitors including non-spenders. 1 in 7 visitors to the National Park did not spend any money at all. Accommodation was the sector with the highest visitor spend [2:8].

Data relates to average spend per visitor (from those visitors who have spent) by spending category. This is different to STEAM averages as this includes a wider range of visitors.

# How often do visitors come?

Just under 1 in 10 visitors are first time visitors to the Peak District [2:9]

Around half of visitors are regular, repeat visitors (visiting at least once a month), just over a quarter are less frequent visitors and just 7% are first time visitors, the same as in 2005.

# Were visitors happy and will they return?

Almost all visitors rate their time in the National Park positively (99% very good or quite good). 98% of respondents stated they would return, in 2005 this was also 98%. The six people who stated they are unlikely to return stated distance as the reason [2:10].

# Where do visitors come from?

Overall, the majority of visitors came from the East Midlands, the North West, Yorkshire, and the Humber. The district with the largest proportion of visitors was Sheffield, with approximately 1 in 10 visitors from Sheffield [2:11].

← Volume and value of tourism The market non-visitors →