The most tranquil areas of the Park are in the open moorland, away from settlements, crowded honeypots and roads. Compared to the surrounding area the Peak District is an oasis of tranquillity.

# Tranquillity varies across the region and PDNP

The CPRE produced a map showing tranquillity scores across England, although the latest version is from 2001. This map clearly shows the Peak District National Park as a more tranquil area surrounded by less tranquil urban areas. 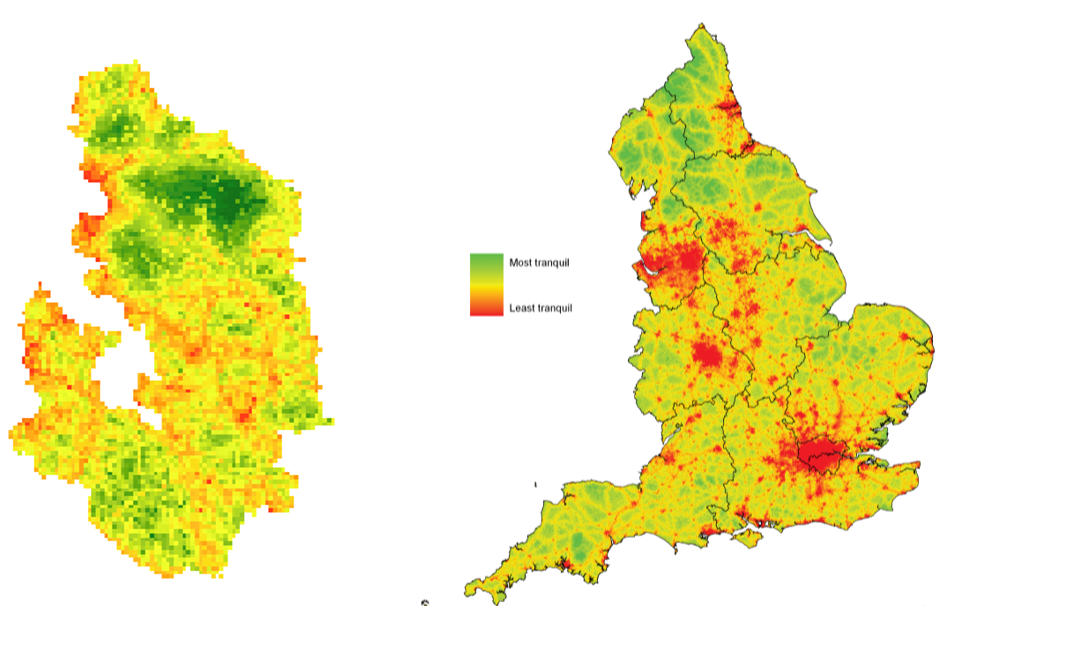 In October 1995, the Council for the Protection of Rural England (CPRE) launched tranquil areas maps, which showed the impact of new development, roads and increased traffic on rural tranquillity since the 1960s. The research showed the Peak Districts area of tranquillity has decreased by a much lesser degree than the surrounding County areas. In the 1960s there were no roads with more than 10,000 vehicles per day within the Park, and as such the tranquil area is the total area of the Park minus the two towns within the Park. However, by the later 1990s there were three roads with an excess of 10,000 vehicles per day within the Park, dissecting the Park into four areas and explaining the 76% reduction in average size of tranquil area.

# Tranquillity is one of the PDNP's special qualities

# Residents value all aspects of tranquillity

In the 2019 PDNP residents’ survey, 79% of residents thought the PDNP was definitely a good place to live. The top two reasons given were:

Other answers related to tranquillity included:

In the 2015 visitor survey, visitors to the PDNP were asked their reasons for visiting. The answers relating to tranquillity included:

Similarly, non-visitors were also asked in 2014 and 2015 what they thought was appealing about the PDNP. The answers included:

The PDNP presents large numbers of people with the opportunity to experience a rural landscape relatively protected from development. Integral to this is the perceived distance between the National Park and the surrounding developments. The relative lack of obvious signs of human influence provide a natural context, best typified by the large expanses of open access land and remote wild areas.

# Opportunities to enjoy the sensory experiences of nature

Tranquillity can be experienced through the sensory experiences of nature. From the sound of bird song and trickling water to the smell of wildflowers and views of open landscapes. From the feeling of squelching through mud and climbing rocks to the taste of wild berries and the rain on your face.

# Tranquil places with a sense of history, continuity and tradition

Tranquillity can also be found when visiting the PDNP's picturesque villages and town with their rural landscape settings. A sense of history is evident within these places where historical associations like Kinder Scout and the Mass Trespass and the wealth of cultural heritage features allow people to see evidence of past people, traditions, land use and industry. For many, this provides a continuity with the past and a perception of stepping back in time, allowing people to experience a rural way of life or a semi-wilderness in contrast to many current urban lives.