Environmental accounts can be used to answer questions such as:

This section presents the available date on major greenhouse gas emissions (carbon dioxide, nitrous oxide and methane), including discussion of methodology and results. The analysis follows on from a similar methodology in 2010 . For this analysis, carbon dioxide (CO2), methane (CH4) and nitrous oxide (N20) data was analysed on a 1km square basis for the Peak District National Park. The. Emissions for the remaining GHGs (F-gases, HFC, PFCs and SF6) are not mapped within the NAEI and therefore it is not possible to allocate emissions to National Park boundaries. Since the sources of the F-gases are predominantly industrial, and industry is infrequent within national parks and not evenly distributed spatially, it is highly probable that the relative contributions of the F-gases to overall National Park emissions are well below the UK average, which is itself very small.

The 1km2 resolution maps are compiled within a GIS environment. Maps for each sector are generated by summing the spatially distributed proportions of the NAEI national total. The latest data available is for the year 2018 [2].

When point sources (opens new window) are removed from the data set to reflect the overall area based modelled emissions, methane consists of 60% of total emissions, the majority of which are derived from agriculture.

# Carbon emissions from transport and industry

Excluding point sources, by far the largest CO2 emissions comes from road transport. The A road network in the Peak District National Park can be seen on the map below, particularly the A628. The link between carbon emissions and transport has been firmly established, so the continued growth in traffic across the National Park will increase carbon emissions. 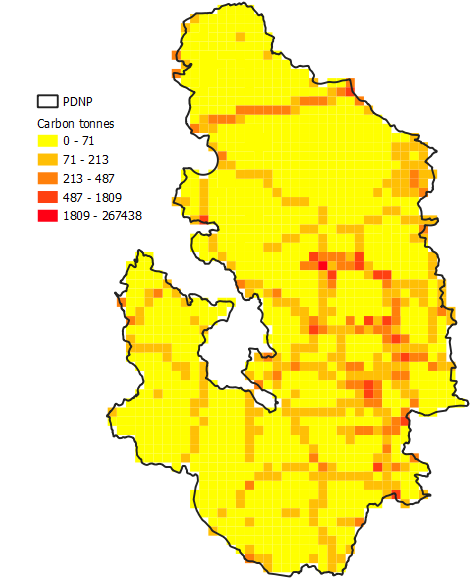 The Peak District National Park is the fourth largest national park in the United Kingdom. It is surrounded by large conurbations, such as Sheffield, Manchester and Derby, which increase cross-Park movements and commuting. The Peak District National Park also attracts a high volume of tourist visits. 16.1 million people live within 40 miles or approximately one hours’ driving time of the National Park boundary. This attracts somewhere between 13 million and 26 million visitors per annum, of which we know roughly 8 in 10 come by car.

It is clear from the map below, that the majority of increased methane emission areas come from areas outside of Moorland, which are mainly located in the Dark Peak and South West Peak. 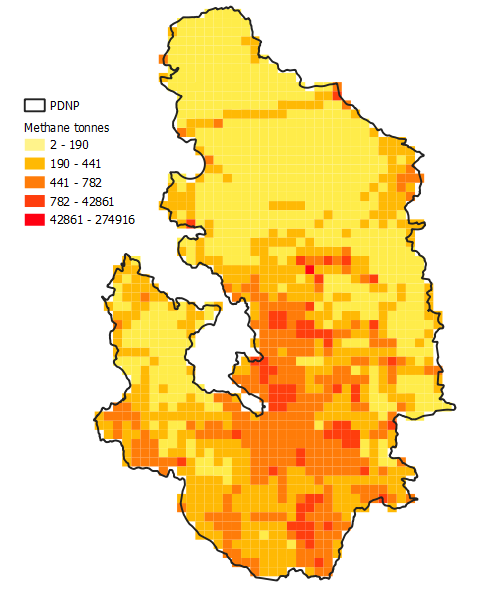