# Landscapes of the Peak District

Landscape is more than just ‘the view’. It is about the relationship between people, place and nature. It is the ever-changing backdrop to our daily lives. It can mean a small patch of urban wasteland as much as a mountain range and an urban park as much as a lowland plain.

Landscape results from the way that different components of our environment – both natural and cultural – interact together and are perceived by us. People value landscape for many different reasons. It is therefore important to understand what the landscape is like today, how it came to be like that and how it may change in the future.

There are different layers that combine to make a landscape: 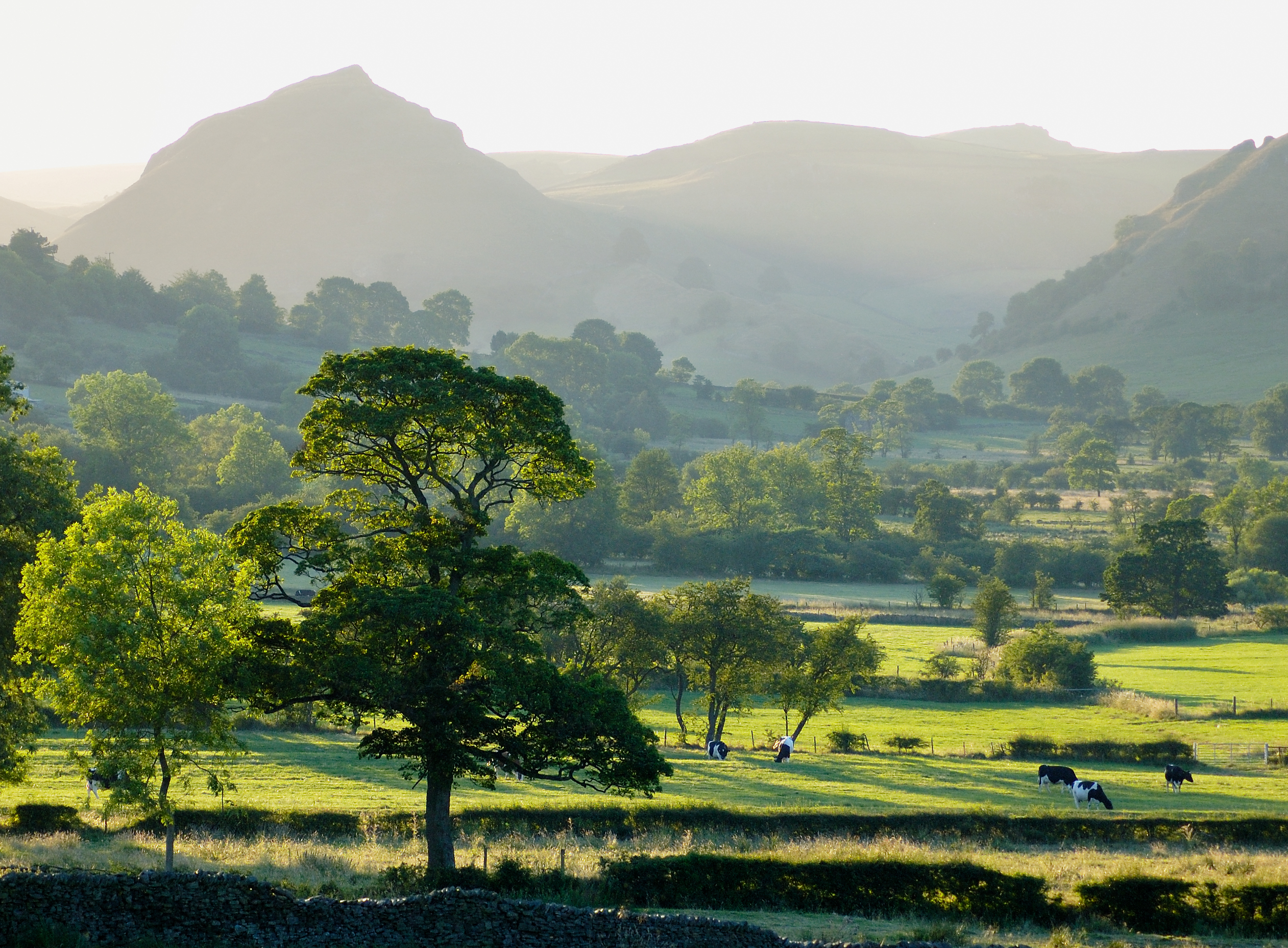 The Peak District National Park is Britain’s first national park. Taken as a whole, it is a treasured landscape that has been shaped and continues to evolve through the interaction of natural and cultural forces. It is a landscape of exceptional natural beauty that provides opportunities for outdoor recreation to millions of people.

At a local scale, the Peak District National Park consists of many individual landscapes, each valued for their particular characteristics. These landscapes contrast with surrounding industrial and urban landscapes, enriching the lives of everyone who visits, lives and works in them. They also provide many other essential services to support life and economic activity, including fresh water supply, carbon storage, farming and tourism.

# Characterising the landscapes of the Peak District

The Peak District National Park contains a wide variety of landscapes including broad open moorlands, more intimate enclosed farmlands and wooded valleys. These landscapes have been shaped by variations in geology and landform and the long settlement and use of these landscapes by people. Today's landscapes have a rich diversity of natural and cultural heritage and this diversity is enjoyed by local communities and visitors.

There are several different methods for characterising the landscapes of the Peak District, each of which group areas with common characteristics together and classify them as a particular type of landscape. More detailed information on specific Peak District landscape classifications and the actions that are needed to conserve and enhance them can be found in the Peak District National Park Authority’s Landscape Strategy [1], but below is a brief explanation of some of these.

A Landscape Description Unit (LDU) is a representation of a Landscape Type in a specific location. They are the basic building blocks of the landscape and are defined by a combination of six key characteristics relating to geology, topography, soils, tree cover character, land use and historic settlement pattern [2]. The national typology (level LDU1) is available at MAGIC.gov.uk.

England is divided into 159 National Character Areas (NCAs) [3], each of which is distinctive with a unique 'sense of place'. These broad divisions of landscape form the basic units of cohesive countryside character, on which strategies for both ecological and landscape issues can be based. The Peak District is broadly split into three National Character Areas: the Dark Peak, the White Peak and the South West Peak. Full profiles for these can be found on the Natural England Website [4] and a short summary is given of each below. These NCAs are commonly used to characterise the different areas of the Peak District and each NCA has its own landscape partnership working to conserve and enhance the areas.

The Dark Peak is an upland, gritstone landscape of open moorlands, reservoir valleys and in-bye pasture. Its unenclosed moorlands sit on peat and mineral soils and are consist of blanket bog, heathland, rocky edges and rough grassland. Most of the moorland is of international value for its habitats and species, especially upland birds, with designations covering almost half the Dark Peak. The blanket bog has a history of poor condition, but conservation work in recent years has started to reverse this.

Livestock grazing is supported on moorland edges and in-bye on wet rushy or tussocky grassland as well as on more improved grassland lower in the valleys. These fields provide feeding and nesting areas for wading birds like curlew and lapwing. Internationally important populations of grassland fungi are supported on some unimproved pastures.

Several major Dark Peak reservoir valleys provide drinking water to the surrounding urban populations, such as Sheffield and Nottingham. These valleys are surrounded by large conifer plantations, but their smaller cloughs and valleys with fast-flowing streams have remnants of ancient oak and other broadleaved woodland.

The Dark Peak has been of importance to people for thousands of years and evidence of this exists today. From Stone Age remains beneath blanket bog to Bronze Age stone circles, Medieval settlements and field enclosures and the industrial remains of coal mining, millstones production and lead smelting. Several large historic houses have associated parkland and wood pasture, which are important for large old specimen and veteran trees.

The White Peak is a raised, undulating limestone plateau incised by steep sided dales. It has a strong identity, which has been largely created by the effect of the limestone geology on landform, natural and man-made features.

The area’s dales are of international wildlife value due to their flower-rich grassland, ancient ash woodlands, and clean rivers that supporting various fish, invertebrates and birds. However, only 6% of the White Peak is designated for wildlife, compared to 45% of the Dark Peak. These diverse and special habitats are often small, linear, fragmented and in variable condition.

There is a rich human history in the White Peak, with centuries of farming and industry creating a higher density of settlements compared to the rest of the Peak District. Characteristic dry stone walls, farmsteads, scattered field barns, lead rakes, dew ponds and ridge and furrow tell the story of how people have interacted with this limestone landscape for generations. The plateau is rich in archaeology, which ranges from prehistoric sites to mineral workings and the more recent quarries. The pattern of drystone walls is unique and reflects different periods of enclosure. In total, the White Peak has an impressive 217 scheduled monuments, 803 listed buildings, 46 conservation areas and over 6,300 non-designated heritage assets.

Around 89% of the White Peak is a farmed landscape and 99% of this is grassland, predominantly used to support livestock, with more intensively managed dairy farms on the plateau. The area is recognised as being of national importance in providing public goods relating to wildlife, geology, cultural heritage and recreation. It is also recognised for its importance in providing clean water and regulating the climate.

The South West Peak is a crossroads where upland meets lowland creating spectacular gritstone edges, and where north meets south and east meets west. It is scenically and distinctly diverse. This upland landscape has open moorland at its core that is dominated by blanket bog and heathland, often enclosed into large parcels. At the fringes, the land falls away to gentle slopes, dissected by steep wooded cloughs. At lower elevations, fast-flowing streams open out to form wider river valleys characterised by permanent grassland with rushy pasture, species-rich hay meadows and improved productive farmland. This traditional working landscape has been created by generations of farming and is dominated by livestock farming. The fields are small or medium and mostly bounded by drystone gritstone walls, although there are some hedgerows lower down the slopes. The settlement pattern is dispersed across the landscape with small settlements, traditional farmsteads and isolated field barns predominantly built of local stone reflecting the geology, history and local building traditions.

There is a strong sense of place due to the area’s nationally important historic landscapes and cultural heritage, which ranges from prehistory to the modern day, with features particularly from the medieval period.

13% of the South West Peak is designated as Sites of Special Scientific Interest (SSSI). The area supports internationally important mosaics of habitats, which in turn host species such as merlin, curlew, lapwing and skylark.

Where the peaty moorland soils are in good condition, they store significant amounts of carbon and water, with wide-reaching benefits for water quality, climate regulation and wildlife. The area is also important for water supply: eight rivers have their sources in the South West Peak’s uplands, with several running into reservoirs that supply water locally and to nearby towns and cities.

Though less well visited than some other areas of the Peak District, the South West Peak is important for recreation and tourism due to its open access areas, wide-ranging views and network of footpaths and country lanes. Iconic features such as The Roaches attract visitors from further afield, but visitors and locals alike appreciate the tranquillity gained from quiet enjoyment of this relatively undiscovered area.

The whole National Park has been covered by Historic Landscape Characterisation (HLC) and this is available as a spatial GIS dataset. HLC uses historic maps, aerial photographs and other sources to assess the historic development of discrete areas of landscape across a series of ‘time slices’ from the 1600s to the present day. HLC reveals the patterns and connections within a landscape, spatially and through time, giving us a wider perspective on landscape development than we can gain by looking at sites in isolation. Understanding the historic landscape is critical for understanding why our present-day landscapes look like they do. All the national HLC data and reports are publicly accessible, and are held by the Archaeology Data Service.