The vast majority of new build development is within or on the edge of settlements. In open countryside, re-use of existing buildings is the norm. The ‘natural zone’ retains its wilder, open character.

However, some development that is potentially harmful to these special qualities does take place. In the open countryside, new-build dwellings, agricultural barns and non-land management businesses have been given planning permission contrary to policy (or may be permitted development in the case of agricultural buildings.) There are higher than anticipated levels of development in the natural zone and it is not clear that this contributes to conservation and enhancement.

We do not currently have enough evidence to judge the cumulative impact on landscape character of all development – whether according to policy or not. The current landscape review or other research will need to address this.

A Policies Map is a plan of the National Park detailing the various proposals and designations referred to in the Local Plan documents. These can be viewed here:

In the previous 8 years, there was only one year where no decisions were made against policy. While this is a worrying trend, the numbers remain low. Each decision made against policy can impact the PDNP special qualities in a multitude of ways. This means quantifying their impact individually or together over time is very difficult. For instance, many of the applications relate to agricultural developments in the open landscape or caravan and camping sites.

General spatial policies (GSPs) provide overarching principles for spatial planning in the National Park and relate closely to the delivery of national park purposes. Policy GSP1 seeks that any development proposal will comply with core policies so that any development in the National Park must satisfy the statutory purposes of national park designation. Where there is an irreconcilable conflict between the statutory purposes, the Sandford Principle will be applied and the conservation of the National Park will be given priority.

Strategic review of permissions made against policy with recommendations for monitoring in the landscape.

# The Natural Zone has protected the PDNP from harmful development

The Natural Zone is part of the spatial strategy and defines areas of wilder and more sensitive landscape and habitat identified under Section 3 of the Wildlife and Countryside Amendment Act 1995. It is defined by:

Applications inside the Natural Zone

There is insufficient evidence to judge the cumulative impact on landscape character of all development – whether according to policy or not. Further evidence in this regard could be provided by the Landscape Strategy review. If it is not provided by the review (either because of a delay in the review or the methodology) then further research will be needed to assess the impact of development on the landscape.

# Spatial strategy and relationship of settlements

Applications for new build dwellings outside of named settlements

Whilst a low level of development is anticipated in countryside locations, an over-supply of new development outside named settlements would adversely affect the undeveloped character of the area as well as impacting negatively on the sustainability of the area. It would exacerbate problems for service providers and potentially place more people in remote locations where social interaction and service provision is more difficult, particularly for less mobile members of society, both young and old.

A broader understanding of development as a whole permitted in the Natural Zone, including natural enhancements as well as built development.

The majority of development happens in accordance with the spatial strategy. However, as noted in the Local Development Framework Annual Monitoring reports, there are also negative effects on landscape character emerging due to pressure from factors such as:

There is no evidence either way to say whether the distinctive and valued historic character of the settled, agricultural landscapes of the White Peak have been protected, nor whether the wild character and diversity of more remote areas has been enhanced. There is no evidence either way (particularly with regard to the enhancement of woodland and biodiversity) to say whether the settled, agricultural character of the Derwent Valley landscapes has been protected and managed.

# Agricultural buildings in the PDNP

An analysis of the size and location of new agricultural buildings granted planning permission between 2011 and 2018 has been undertaken. On average, 49 new agricultural buildings per year were permitted across the National Park. 62% of these were in the White Peak, 30% in the South-West Peak and 8% in the Dark Peak. The average size of the buildings permitted is 334m² (equivalent to approximately a 20m x 17m building). 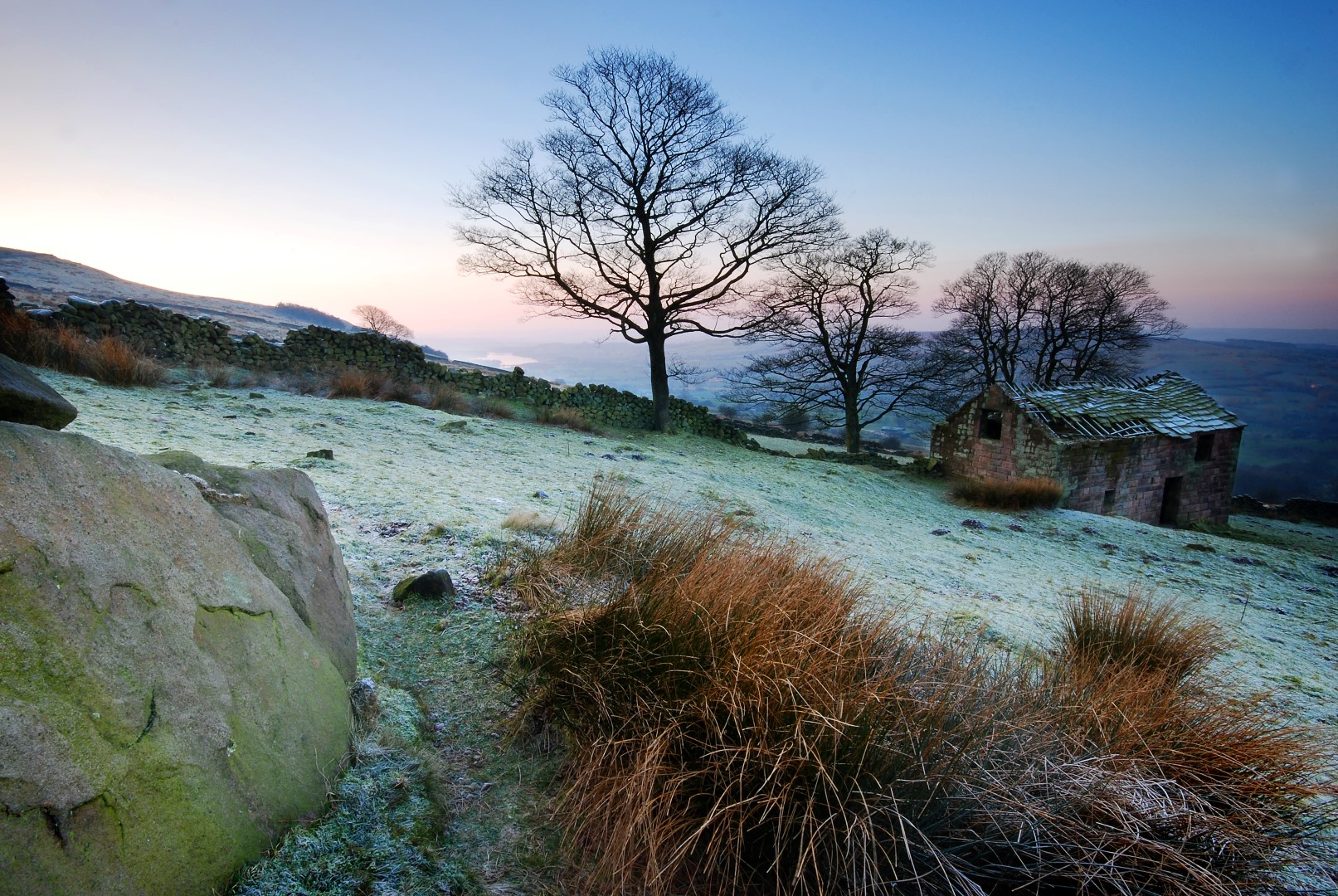 The report also considers the effect of new agricultural buildings on valued landscape character (and by implication the effectiveness of existing planning policy). Although limited to using only plans and aerial photography, the report concludes that ‘the majority are within farmsteads and appear appropriate’. However, some development appears to be contrary to policy and cumulatively could be causing harm to the landscape, such as:

More research is needed to understand landscape impact, in particular to improve mapping (where are the hotspots) and undertake site visits to quantify the impact on the surrounding landscape.

Pylons in the Peak District National Park have been dominating the skyline in the Longdendale Valley since the 1960s, with a notable impact on the natural beauty of the area. However, the Peak District National Park (East) project will replace a 2km section of overhead line east of the Woodhead Tunnel near Dunford Bridge with an underground connection, permanently removing seven pylons and a sealing end compound from the landscape [1]. 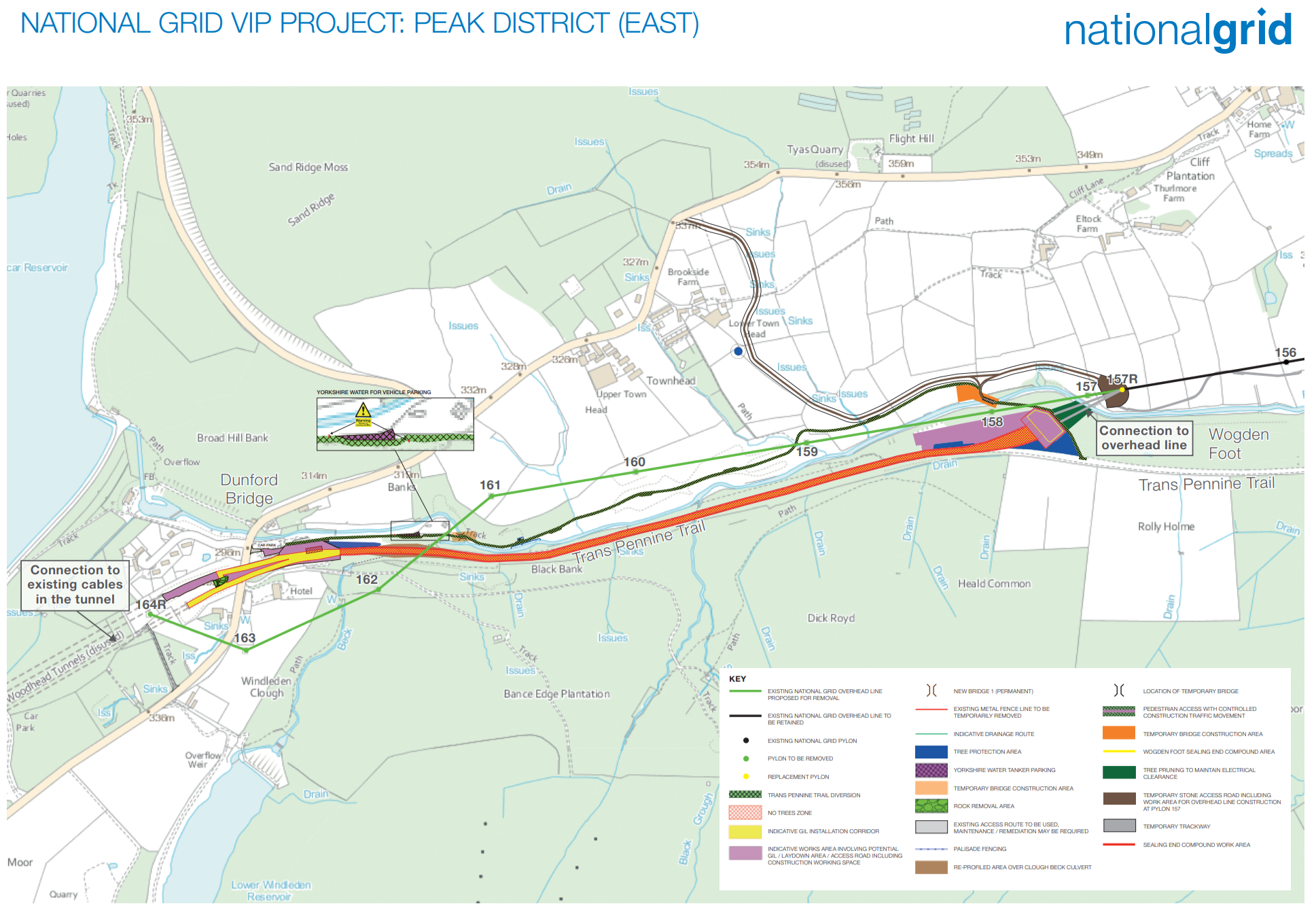 The preferred route for the connection runs along the Trans Pennine Trail to the south of the River Don to join the existing cables in the Woodhead Tunnel. To connect the remaining existing overhead line, a sealing end compound and associated terminal pylon would need to be constructed at Wogden Foot.

National Grid supply shapefiles of ‘high voltage overhead electricity lines’. Note that only the high voltage ones are included, not any local lines, and the data only covers England and Wales.

Broadband is a very fast-moving and complex topic and so it is difficult to predict the outcome of government and community investment over the next 2 to 3 years. There remains uncertainty over funding processes, technology and commercial sensitivity of data and there may be planning considerations as a result of any wireless infrastructure. It is worth noting that the Peak District National Park Authority have worked with mobile phone companies in the past to approve over 90% of masts in the PDNP.

For more information on broadband see the local economy section.