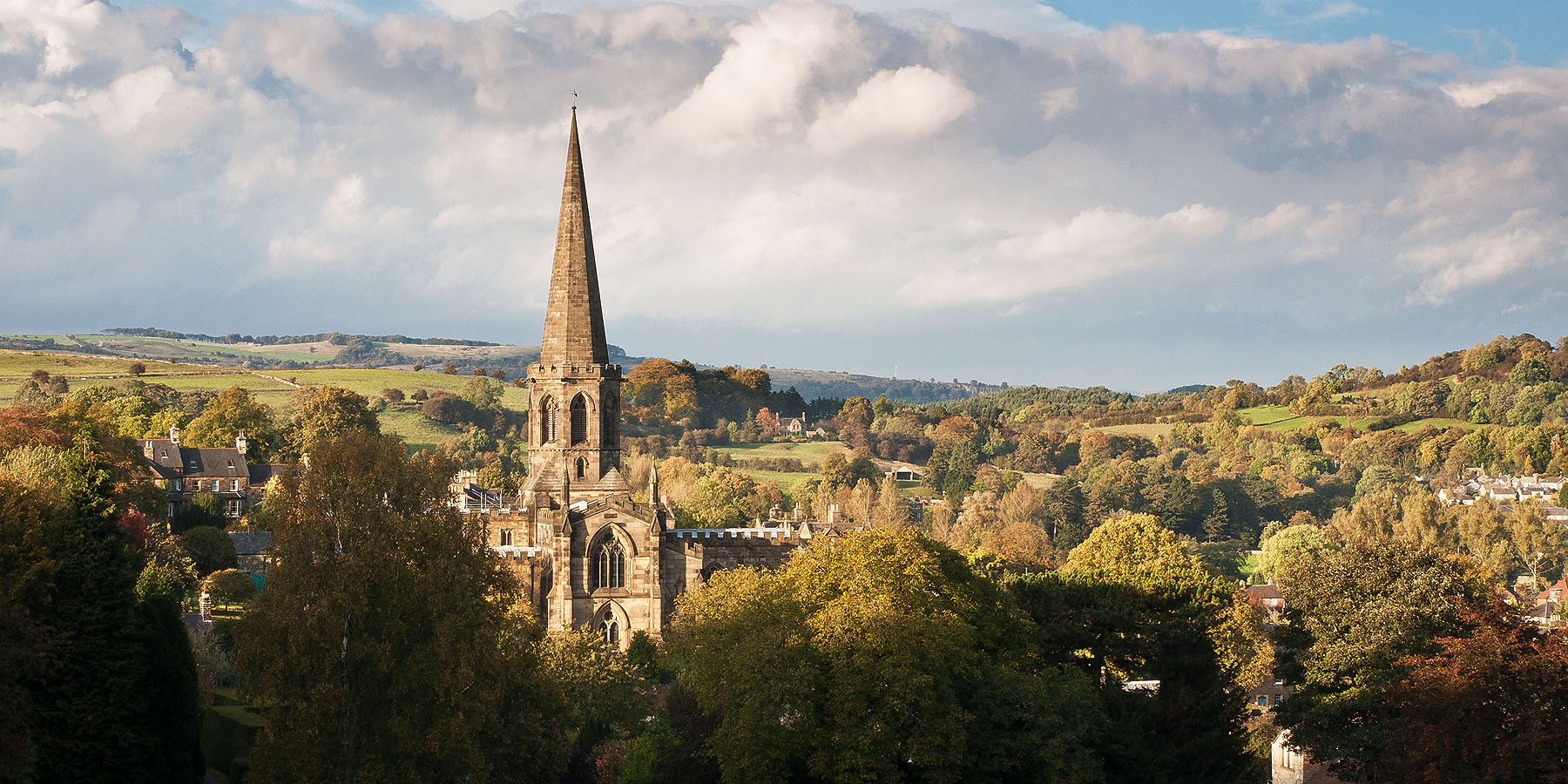 Generations of life are reflected in the diversity of the Peak District National Park’s buildings, whether agricultural or industrial, religious or social, domestic or educational. Together, these create the characteristic settlements typical of the area, with manor houses, churches, schools, farmhouses, inns, shops and industrial buildings of all sizes, from large mills and factories to small smithies and workshops. The settlements range from loose, linear communities of farmsteads and paddocks to nineteenth century planned estate villages. They have a rich history, with many mentioned in the Domesday Book of 1086.

The settlements and communities have evolved alongside industry. The area has been farmed for thousands of years and many farmsteads have medieval origins, with some dating back to former royal and private forests. Industries have shaped the character of settlements through weavers’ cottages, terraced workers’ houses, mills, smithies and workshops. Large landowning families have also given some communities their iconic character, such as the Chatsworth Estate and Edensor village.

Today’s surviving historic places are a rare connection to a unique past; painting a picture of people’s lives in the Peak District National Park. These traditional settlements built by communities to meet local needs create the unique character of the place, with their distinctive grouping and use of locally available stone – limestone in the White Peak and gritstone in the Dark Peak. Walk through scattered medieval farmsteads in Abney or discover ancient villages of labourer’s cottages like Bradwell and feel connected to the lives of those who lived and worked here in the past. Explore Bakewell with its Anglo-Saxon church founded in 920 and famous five arched bridge from 1200 and marvel at the ingenuity of our ancestors.

These distinctive historic places have a sense of community with local people feeling pride in the area and connected to its history. Today’s communities are involved in everything from conservation projects and producing future village plans to providing community transport. Community initiatives like Bamford’s community-owned Anglers Rest and the community-led Calver Weir Restoration Project show how local communities continue to shape the area. Many cultural traditions continue today, with crowds of local people and visitors attending events like Tissington well-dressing, Edale fell race, Castleton Garland Day and Winster Pancake Run. Such traditions link together local communities, past and present.

Many stories and products are associated with Peak District National Park settlements. Visit Eyam to learn how seventeenth century locals isolated themselves to stop the Bubonic Plague spreading. Go sightseeing in Castleton and explore its caves, including the Blue John and Treak Cliff caverns where the famous Blue John gemstone is found. Try a Bakewell pudding, which local legend attributes to an inexperienced cook’s attempt at a jam tart.

The Park is in a unique position, at the heart of the nation surrounded by major urban areas. The resident population remains at around 37,905 living in Bakewell and more than 140 villages and hamlets. Surveys show that residents have a strong connection with their local environment and landscape, high levels of community activity and awareness around Peak District cultural traditions reflect this. Some of the challenges for people living within the National Park are to maintain balanced and vibrant communities when faced with high house prices, low wages, an aging population and inconsistent access to services. A high priority for most resident communities and constituent local authorities is the provision of affordable housing.

People who visit, live or work in the Peak District National Park directly benefit from it. Yet many of its benefits go beyond its boundary. Many businesses within the Peak District National Park derive direct and indirect economic benefits from their unique location and relationship with its landscapes. Economic output comes from a diversity of sectors with potential for growth and development. It is this relationship that we seek to foster and build upon in order to deliver National Park purposes. To further this relationship, we will encourage businesses to embrace the landscape, and the enhancement of it, as part of their business model.

The Landscape is valuable to business:

Economic Output is increasing before Covid-19:

Most Businesses in the PDNP are SME:

The majority of residents are in employment or retired:

Unemployment rate is low but tracks the national trend:

The PDNP has an ageing population:

Nearly half of all households are owned outright in the PDNP:

There are a large number of communities at risk of flooding both within and immediately downstream of the PDNP, with major cities (Derby, Manchester, and Sheffield) affected by flood waters originating in the PDNP.

Living in the area of the Peak District National Park had a positive impact for the majority of residents on how they coped during lockdown. Also, a strong sense of attachment to the area was clear from the results with several people involved in volunteering activities to support the National Park.

The most negative impacts of the national COVID-19 restrictions were people being unable to socialise as before and many shops being closed. The most positive impacts were less traffic on the roads and fewer visitors in the Peak District.

The lower number of visitors due to the strict lockdown restrictions during the first wave of COVID-19 had positive impacts for locals especially with regards to the improvement of social relations with other locals and the feeling of connectedness to nature. However, those whose household income relies on tourism experienced a negative impact on their economic situation.

The impact of tourism can be negative for those living in a place where tourists gather or travel through in numbers. While the Park has taken great strides in adapting and innovating to better provide for changing tourism demands, a significant opportunity remains to make more of the Park’s rich special qualities to attract longer staying visitors or in different peak times.

There is a need to work with communities through strategic visitor management forums and strategies. There is potential to share experiences of good/innovative practice in how we manage visitor pressure in key ‘honey pot’ sites. Many stakeholders have suggested that visitors need to be encouraged to make contributions to the upkeep of the National Park.
There is also a need to manage expectations for residents and visitors alike and strike a balance in outlooks.
Communities feel there is a need to get the right infrastructure in place if we are to encourage greater recreational use of the National Park i.e. responsible and sustainable tourism. Is there a need to quantify the benefits and build data on the value of visitors to the local economy and the impact they have on the special qualities of the park.

Many residents and partners see availability and affordability of housing as big issues. The perceived lack of affordable housing is seen as a serious problem, despite relatively good provision in some areas.

Nationally, government is reducing subsidy for social housing (particularly for renting) and moving to the political aim of home ownership (starter homes). These however do not address the affordability problem across England.

House prices are too costly for first or second time buyers. Maintaining planning policies which encourage modest, affordable homes helps to address this issue. Therefore there is also a need to continue to influence market housing (approved for conservation and enhancement purposes) towards those of a size and type that are needed by local communities.

There is an opportunity to explore community land trusts so that communities can control the size and type/tenure and occupancy of locally needed homes.

There is an opportunity to assess the success of measures being tested across the country, e.g. through neighbourhood plans to control second or holiday homes through ‘principle residence’ policies.

There has been a decline in community services over the last ten years, particularly of shops, post offices, healthcare facilities and public houses. Excluding pubs, primary schools and post offices remain the most common rural service in the Peak District.

The geography of the National Park means most people depend on cars for transport. Increased distances to access services can result in a higher cost of living.

There is a question over whether access to services is problematic in reality or if it is in fact down to perception as most residents have access to private transport for jobs and services. However, life is extremely difficult for those without access due to continuing reductions in public transport.

The age profile of communities and implications for the future. National parks and rural areas have a much older age structure than the rest of the population. This can impact on communities where services are no longer provided locally, and vulnerable people may struggle as they can’t travel to get them easily.

There are an increasing number of people who have been made redundant from jobs around the Peak District. Unemployment looks likely to remain most prevalent amongst the younger generation. The Peak District may be less affected by continued recession and resulting unemployment due to relative high levels of wealth, and the average age of residents.

The Peak District lends itself to working from home but poor broadband speeds make it harder than it should be to work. There remains uncertainty over funding processes, technology and commercial sensitivity of data, and there may be planning considerations as a result of any wireless infrastructure.

The National Park Authority has worked with mobile phone companies in the past to approve over 90% of masts in the Peak District.

There is also need to ensure rollout progresses at speeds promised by partners.

Implications of Brexit Value of the pound compared with the euro and the potential impact on small businesses. There will be a review of both business grants and support for a new national rather than European programme ready for when the UK leaves the European Community. This will be particularly relevant for the small and micro businesses typical of the National Park and the wider Peak District.

Despite positive work with LEPs there is still a risk that rural areas such as the Peak District are overlooked in favour of jobs and growth in urban areas, and accessing finance to grow local businesses via LEP funding remains an issue.

Multi LEP coverage of the National Park leading to inconsistency of business support and funding opportunities across the area.

The Office for National Statistics (ONS) supply most of the Economic and Demographic data found in this report. ONS provide exact fit data for National Census and some population surveys such as mid-year estimates. However, many economic data sources such as the Inter Departmental Business Register (IDBR) or the Business Register and Employment Survey (BRES) are reliant on annual business surveys. These surveys cover most large businesses with the proportion of businesses sampled decreasing with size, such that only a very small proportion of micro (0-9 employees) businesses are sampled. As most businesses in National Parks tend to be small, the proportion of businesses sampled in these surveys would likely be very low. So, exact cut figures from business surveys would likely be subject to high levels of uncertainty. Moreover, national parks have relatively small populations compared with most local authorities (with the exception of South Downs). So, for household survey data, such as the Annual Population Survey (APS), even if an exact National Park cut could be produced, the figures would again likely be subject to high sampling uncertainty. Most data we source for the IDBR or BRES is therefore created by aggregating the smallest statistical geography available and creating a ‘best fit’.